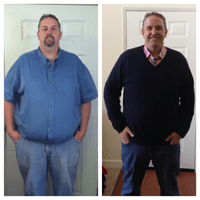 “I used to tell myself my size didn’t matter. I feel good and I have lots of friends, a job and a nice place to live. But, my self-confidence wasn’t good. I’d take a look at myself in the mirror and think, ‘you’re never going to have the life you really want.’

“Now, since the surgery, to be in restaurants, airplanes and even amusement parks with no problem . . . to buy clothes in regular department stores . . . to go on dates or be out in public and have people notice me with an appreciative glance . . . it’s an amazing feeling.”

At 6’3″, Matt has always been a big, active guy. He grew up in the Santa Cruz Mountains, where kids often teased him about being fat. Throughout his time at Los Gatos High School, he was a three sport athlete.

“Looking at old photos, I always thought of myself at heavy, but not obese,” he remembers. “But, I’m much like my dad. It’s our lot in life to be friendly and the life of the party, but also to love food and gain weight.”

It was during his college years that Matt really started putting on the weight. By the time he was in his 20s, he was in the 400-lb. range.

“That’s when I started working out in the gym and going to Weight Watchers. I was able to drop a lot of weight and, at one point, got down to 250 lbs. The trouble was, I never hung out with my friends or went for a beer or a glass of wine. I was in the gym all the time and, basically, didn’t have any kind of a life.”

Food has always been important to Matt. In his mid-30s he started putting the weight back on.

“It was as though food consumed me, and it felt like I never had enough. Plus, as I got older, it was harder to take off the weight in the gym,” he recalls.

At times, he would ‘give up’ his life again, redoubling his exercise efforts and trying to keep his diet in check—only to put it all back on and more. By the time he was in his early 40s, Matt was tipping the scales at 460 or 470 lbs.

Life changed the day he was approached by an old acquaintance during a night out with friends.

“I recognized her eyes, but not the rest of her. She looked great,” said Matt.

Turns out they had known each other for a long time and had a few things in common. She, too, was a good athlete and an active person but had always battled her weight. When Matt asked her what she had done to look so good, she told him about having weight loss surgery and urged him to consider it.

Over the next few months, he learned as much as he could about the surgery and his options. He met with a weight loss surgery nurse, attended support group meetings, and was referred to Dr. Zare, a surgeon on the medical staff at Good Samaritan Hospital. It was time for a change.

Matt and his surgeon selected a procedure called the laparoscopic vertical sleeve gastrectomy. With this minimally invasive surgery, a narrow sleeve of stomach is created and the excess stomach is removed. The procedure limits the amount of food a person can eat and helps suppress appetite. Patients can lose more than 75 percent of their excess weight over a period of eight to eighteen months.

After going through the weight loss surgery programwith Dr. Zare, and completing the necessary tests and preparations, Matt had his procedure. His parents and brother were with him. Friends and family were very supportive throughout his brief time in the hospital and for a two-week stay at his parents’ house after his discharge.

“The hospital experience was great. I had a private room, flat screen TV with all the stations, and everyone was very nice,” said Matt. “I’m not going to say it was totally easy and painless, but I got through it with some excellent care and a lot of walking the floors on my part. I guess all my working out had put me in good shape. I bounced back pretty quickly, and Dr. Zare sent me home earlier than expected.”

Matt continued his walks and returned to the gym for light workouts a week after surgery. He was able to go back to work in just two weeks. For him, the hardest thing was the all-liquid diet he had to follow for two months.

Within 4-6 weeks, he began doing heavier workouts at a new gym called Fitness Never Sleeps. According to Matt, the weight began ‘pouring off,’ with 50 lbs. vanishing in the first three months.

“That gym and the people there have become my support group. Working out has taken the place of much of the eating that used to be such a big part of my life,” he reports.

Matt won’t lie. Going through the changes in his body and adjusting to a much smaller diet have not been easy.

“But, I will say weight loss surgery is a wonderful tool that is making it easier for me to get to a healthier, more attractive weight and enjoy life on my own terms.”